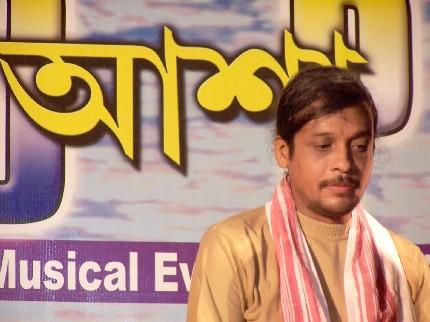 Popular music artist and keyboard player Nupur Bordoloi died on Saturday. He was 37 and he was suffering from blood cancer for the last couple of years. He is survived by his wife Pori Gogoi and his daughter. The end came at 5-45 in the morning on Saturday while he was undergoing treatment at a city nurshing home. But within this period, he attained commanding popularity. Several artists have condoled his untimely and premature death.

Permalink Submitted by Raktim Sharma on Tue, 25/03/2008 - 22:49
I watched Nupur Bordoloi on stage sometime in 2001. He was on a one show reunion with Dorian Platonic, which had Bulbul Das on bass, Hriday Goswami on vocals, Rajib Borbhuyan on guitar and mr. preetam on drums. Mr. bordoloi left the crowd awestruck with his flamboyance, playing his keyboard with his feet, elbow, tongue, teeth....and fingers of course. i became a fan eversince. i always wished he would get well soon. two persons i admired a lot took the road to heaven, nupur da and Seelabhadra, the noted author. it's a helpless moment as an assamese....i pray our soil can give birth to talents like these in the future. in the meantime, their memory remains.

Permalink Submitted by Tituraj Kashyap on Wed, 26/03/2008 - 22:28
This is very sad. At least at a time when there is a dearth of people who really have the courage to be different and do something new in the music. In Nupur Bordoloi, we have always found a persona who would keep the audience at the at edge of their seats. The way with which he carried himself on the stage and his brilliance with the keys remains immortal. Sometimes, it is a difficult time.

Permalink Submitted by Indrajit on Tue, 29/04/2008 - 00:46
He was a legend in musical field. I always thank to God that he gave me the privilege to meet Nupur Da in his life time. May God bless his soul.

Permalink Submitted by Debojit Sarmah on Thu, 11/12/2008 - 05:25
It is very shoking and sad news for me and for all Assamese people of Mumbai.We have seen Nupur Bordoloi's performance in Assam Bhawan,Mumbai.With his ailing health Nupur entertained People and encourages Cancer Patients. May his soul rest in peace.

Permalink Submitted by Kabir Hazarika on Wed, 05/08/2009 - 05:44
This is sad to know that Nupur is no more. Just now, I came to know through this website. I'd seen him playing a decade back in a Bihu function. I knew about his presence in Dorian Platonic through Rajib Borbhuyan - Lead guitarist when I was learning guitar. The music world has a great keyboardist & musician. He's a rare talent. Rest in Peace, Nupur.

Permalink Submitted by Ro Kholum on Sun, 24/04/2011 - 00:05
May be it was during 2006 or 2007, I didn't remember,I saw him playing as a lady sang along some song in a interview-like program on NE TV. This was the first time I saw him playing and didn't know who he was at that time. He played so wonderful that I just gave him a standing ovation before the TV. He was such a great keyboardist and haven't seen any player playing live like him till date. To me he was one of the best keyboardist in the world. Dear Nupul, you are great and wonderful! I will never forget that morning I first saw you.

Permalink Submitted by Ro Kholum on Sun, 24/04/2011 - 00:12
May be it was during 2006 or 2007, I didn't remember,I saw him playing as a lady sang along some song in a interview-like program on NE TV. This was the first time I saw him playing and didn't know who he was at that time. He played so wonderful that I just gave him a standing ovation before the TV not knowing who he was then. He was such a great keyboardist and haven't seen any player playing live like him till date. To me he was one of the best keyboardist in the world. I will never forget that morning I first saw him.

Permalink Submitted by pratyush on Wed, 14/09/2011 - 16:30
I consider myself lucky to learn keyboards from the great man!!He was just awesome on the keyboards.I rate him the best in the world.NUPUR DA ,MAY YOU LEAVE LONG IN THE HEART OF UR FANS. REST IN PEACE.

today on NETV there was a

Permalink Submitted by Samuel konger on Thu, 21/03/2013 - 11:09
today on NETV there was a short program- tribute to late nupur bordoloi which reminded me of my very old friend. whom i met in 1991 as we've invited Dorian Platonic  to Naharlagun,Arunachal Pradesh to perform a show.prior to that I've heard about him in1988 at Kohima, Nagaland that there is a keyboard player who can play throwing the keyboard backward, with his toung, elbows etc.so we've invited Dorian Platonic to naharlagun where they (including Rajiv Barua on guitar, Pritam on drums and hriday as a vocalist performed so well esp. nupur with his unique way of playing keyboard. perfomed many numbers. he was such a soft spoken person. may he come back to earth as a human being again and show his unique way of keyboard playing to the whole world.May his soul rest in peace till then.

Permalink Submitted by Samuel Konger on Sun, 10/12/2017 - 18:45
It was in 1991 we a group of friends from Arunachal Pradesh hav decided to invite the band Dirian Platonic to Naharlagun and their Performance was so anazing and we along with the Band members Rajiv the Guitarist, Briwny the Basist, Hriday the Vocalist and Nupur spent the night at Hornbill Hotel, Naharlagun, I keot on taking to All all of them and Nupu r was so gentle and soft spoken we all were mesmerized by his charm. I was Thinking of meeting him to congratulate for their Best performance at South-East Asian Beat contest and then I've come acriss this sad news.... You will always remain in our Heart forever. May be domeday we'll join you upsatair to Jam up again.. _/\_

Nupur da as we fondly used to

Permalink Submitted by pratyush k sharma on Mon, 28/10/2019 - 07:43
Nupur da as we fondly used to call him was my music guru when I went to learn keyboards in Trinity music school in Dispur last gate area in Guwahati..It was Nupur da who taught me the basics music theory which I will always be indebted to. Here is my tribute to this legend from Assam. Nupur da wherever you are we will miss you always. God bless you always

24 Jul 2014 - 7:34am | Jintul Talukdar
Tension seems to have been escalating in Baksa district a day after unidentified gunmen shot dead a person sending shock and anger across the BTAD areas. The gruesome incident took place when...

28 Mar 2009 - 10:53pm | editor
The Assam state zoo authorities have captured a four-year old leopard from Sahokuchi area in Guwahati on Saturday morning after it had sneaked into the human habitat from the nearby jungles.According...