Flood situation refuses to improve on Wednesday forcing the authorities to deploy helicopters in relief and rescue operations apart from Army, NDRF and SDRF personnel.

In the worst-hit Goalpara, over 50,000 people have been camping in 78 camps two days after the cloud burst in Meghalaya wreaked havoc in the district where 10 people died.  A team of engineers is working overnight to restore a damaged bridge at Krishnai on NH 37. Choppers have been flying in Dudhnoi, Krishnai and Bolbola to rescue the trapped people.

The situation in Kamrup (Rural) district turned grim with bodies of two women were washed from a paddy field in Boko area. Vast tracts of land have been submerged in Chaygaon, Nagarberra, Goroimari and Boko as water of rivers Kulsi, Jaljanli, Singra, Kolohi and Brahmaputra gushed in following heavy rains in Meghalaya.

Surface communications along National Highway 37, flooded in various places, remains totally disrupted where a concrete bridge between Nagarbera and Hekra was washed away. 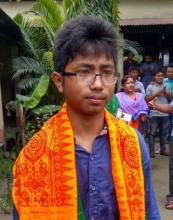 31 May 2017 - 6:16pm | AT Kokrajhar Bureau
The private institutions in Kokrajhar have once again stolen the march in the HSLC examination, 2017 leaving the government schools in a tight spot. This time Bibungsar Basumatary of Barpeta Road...