MUKUT GOGOI, SONARI: At least three army jawans have sustained serious injury when suspected ULFA militants exploded a powerful grenade in Sivasagar district on Friday. The incident took place at around 8 in the morning at Sonari where the IED blew off near a group of army jawans. The injured have been rushed to the hospital. Police and para military forces arrived in the spot and cordoned off the entire area to nab the militants who exploded the bomb. 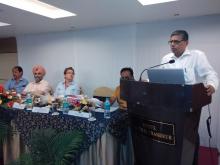