The vice of protest against the arrest of Jaiklong Brahma refuses to die down.

Hundreds of media people in Baksa district staged protest at Mushalpur on Wednesday demanding early release of the journalist alleging it an attack on the fourth pillar of democracy. 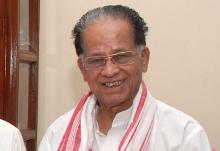 29 Sep 2015 - 8:51pm | AT News
Assam Chief Minister Tarun Gogoi is stable and he is fit to attend two public meetings in Tinsukia on Wednesday. CMO officials told Assam Times that the doctors attending on Gogoi said that his...

23 Jun 2012 - 12:07am | editor
Hundreds of BJP activists on Friday joined the nationwide protest against the recent hike in petroleum products and inflation and participate in the 'Jail Bharo' agitation. More than twenty thousand...