The CBI team dealing with the Saradha scam is believed to have extracted some stunning revelation a day after the county’s premier investigating agency took Sadananda Gogoi to its Kolkata office.

Pressure mounts on the singer and film maker to spill the beans as he was the vital link between Sudipto Sen and Dr Himanta Biswa Sarma.

He further played a crucial role to take former DGP Shankar Baruah to the Saradha boss. On the basis of the revelations, CBI is preparing to quiz sitting Congress MLA Dr Himanta Biswa Sarma and Shankar Baruah in full view of Gogoi and Sudipto Sen.

Gogoi, the singer and film maker allegedly broke the deal between Sen and former minister Dr Himanta Biswa Sarma who is believed to have invested the money at a news channel owned by his wife.

Assam Times has already broke the story of CBI’s preparedness to quiz at least five top political leaders, businessman including the CEO of an Assamese satellite news channel to quiz in this connection. 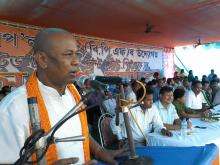 5 Oct 2015 - 6:03pm | Hantigiri Narzary
BPF president Hagrama Mohilary said on Monday that his party will win 16 seats while the 14 other seats would go in favour of UPF in the next assembly polls.Addressing an UPF rally in Chirang he said...

12 May 2012 - 3:43am | Hamidul Gani
Three persons were killed and ten others injured in a head-on collision between bus and a passenger Sawari at Solmari-Kalyanpur under Agia police station in Goalpara district on the Goalpara-Agia...