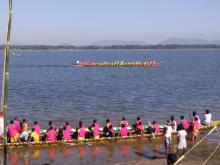 12 Nov 2017 - 8:52pm | AT Kokrajhar Bureau
A Boat race competition pulled huge crowd in Kokrajhar along the Chakrashila wildlife sanctuary on Sunday. Huge peoples thronged at the Dheer Bill to see the Boating race competition from different...