Concern over border on the boil

Chief Minister Tarun Gogoi expressed grave concern over the violence along the Assam­Nagaland border where the miscreants from the neighbouring state killed at least 11 people on Tuesday.

In his Independence Day after the ceremonial hoisting of the national tricolor at the Veterinary Playground on Friday, Gogoi said that the government had taken all possible steps for restoration of peace and normalcy in the affected areas.

He said that a slew of initiatives are on the cards for resolution of the issues through discussion between the two states at the chief secretary level. 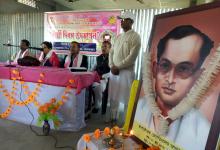 18 Jan 2019 - 9:29am | AT Kokrajhar Bureau
Along with rest of the state, the Shilpi Divas was celebrated at Sangkhardev Sishu Bidya Niketan in Kokrajhar on Thursday. Students and teachers offered their floral tribute to Rupkonwar Jyoti Prasad...