Four persons were caught red handed when they were trying to lift a truck. That too from the Pathsala police station premises on Saturday.

According to sources, identified as Rafikul Islam, Safikul Islam, Nanda Das and Rafikul Islam, they stormed into the police station campus in the wee hours to lift a truck seized by police last week.

Policemen guarding outside arrested them. Interrogation is going on where police got wind of an international gang of car lifters.     / 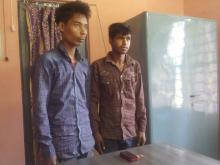 25 Oct 2015 - 11:38pm | Hantigiri Narzary
One more extornist arrested by police who was involved with extortion demand from a contractor of NTPC under Salakati police outpost in Kokrajhar late last night. Four persons were rushed to Harigaon...

18 Dec 2017 - 8:59am | AT News
MARGHERITA: A massive search operation by the security forces have been failing to rescue Arunav Phukan three days after the suspected ULFA-I rebels kidnapped the son of a leading businessman...