There is forecast of more rainfall to add to the flood woes in Guwahati. According to the Guwahati meteorological centre, heavy rains would lash Guwahati during the last 12 hours.

Heavy downpour accompanied by thunderstorm is likely to hit the premier north eastern city now caught in massive water logging in many areas. 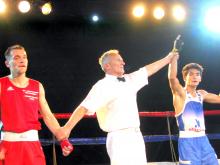 25 Apr 2011 - 11:11pm | Abdul Gani
It was another remarkable feather in a small yet a very colourful cap of one of the most promising pugilists of the country, Shiva Thapa when he snatched gold in his first ever senior tournament...