AICC leader Mallikarjun Kharge is on a visit to Guwahati  on Monday to lead a protest over the move to hike the train fares.

According to AICC sources, Kharge who was the railway minister in the UPA government would take on the Modi government for the proposed hike in the passenger and freight rates.

Notably, initially the Modi government proposed to hike the rail fares citing a pending proposal during the UPA government. But Kharge made it plain that the entire proposal was left to the next government. 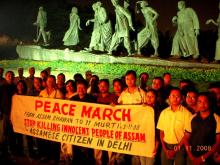 3 Oct 2017 - 9:46am | Shajid Khan
The 1992 Tangla HSLC batch from different nearby schools organized a reunion providing an opportunity to the alumnae to walk down memory lane along with linking up with friends at Arunodoi Jr....

2 Jul 2010 - 12:13pm | editor
Noted critic and prominent citizen Dr Hiren Gohain has sent a letter to chief minister Tarun Gogoi on the progress in terms of holding talks with Ulfa. According to reliable sources, Dr Gohain,who...