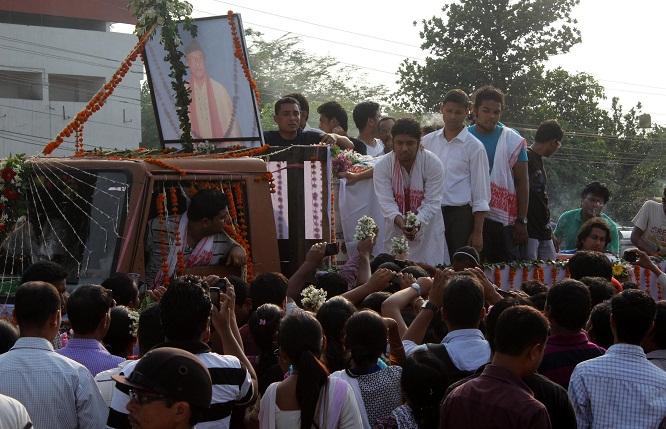 The mortal remains of Khagen Mahanta consigned to flames on Friday a day after the folk song exponent passed away at his own residence in Guwahati.

His son Angarag Mahanta lit the funeral pyre at a plot adjacent to the Sankardev Kalakhetra in presence of thousands of bereaved people in the afternoon.

Before that his body was taken from his residence to the Seuj Sangha who he set up a few decades ago in Ambikagiri Nagar.

Then it was kept at the Ravindra Bhawan premises for four hours to fecilitate the people to pay their last respect to the cultural icon.

16 May 2015 - 10:24pm | AT News
Yet another mild tremor struck no less panic among the people on Saturday evening. Measuring 5.6 in the Rickhter scale, the tremor took place at 5.9 in the evening forcing the people in...

30 Nov 2014 - 3:44pm | AT News
Prime minister Narendra Modi on Sunday vowed to deport the Bangladeshi immigrants saying that he would implement the poll promises.Addressing a huge rally at Sarusajai, Modi said that he won’t...