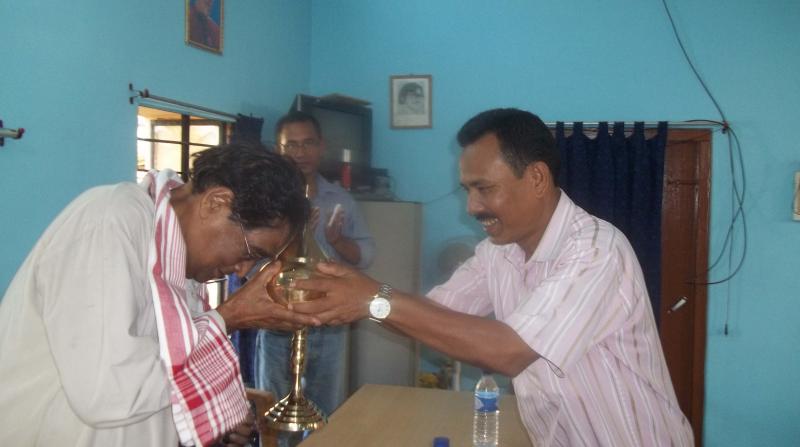 "Assam Sahitya Sabha has lost its glorious tradition of past and is now divided into several lobbies". So said Academy Award winner writer and former president of Asom Sahitya Sabha Dr. Lakhinandan Borah at a felicitation programme at Kalaigaon on May 11. Expressing his displeasure over the present controversial activities of Sabha,Dr.Borah said that lobbying would never help constructive activities of Sabha. He even remarked that Assamese literature would florish even without Sabha. Addressing the felicitation programme which was also attended by writer cum civil service officer Thaneswar Malakar and writter cum businessman Gopal Jalan. Dr.Bora was in all praise for the eople of Udalguri district for maitaining peace and communal harmony during the period when all the other three districts of BTAD namely-Kakrajhar,Chirang and Baksa had been buring causing deaths of more than fifty people including women and chldren. He requested media persons to expose positive picture of the rural villages. According to him new generation writers have shown less consistency and study in them. Thaneswar Malakar,who had served three years term in Udalguri as Deputy Commissioner, while addressing remarked that Udalguri had been his first love in his life and he would do all possible for the welfare of its people. Gopal Jalan also spoke on the occasion saying that he had negative thought about Satras of Assam. But after visiting two Satras in Udalguri district-namely Borongajuli Satra and Harisinga Satra, his thoughts had changed completely. He said Satras in Udalguri had been managed and supported by tribal people.Social worker Gopal Borah and Dandi Kumar Boro also spoke on the occassion. It needs mention that three social organisations of Kalaigaon namely- Kendukalai, Kalaigaon Press Club and Durgat Kalyan Nyas felicitated Dr. Lakhinandan Borah,Thaneswar Malakar and Gopal Jalan at Kendukolai Bhawan on May 11 at 4 pm. Senior journalist Jayanta Kumar Das anchored the proceeding while Kamal Prasad Sarma offered vote of thanks at the end.

3 Jan 2018 - 9:17pm | AT News Imphal
IMPHAL, Jan 3 (NENA): One cyclist was mowed down and three others were injured in a hit-and-run car accident last night, hitting one person after another in Imphal East’s Hatta and NRL pump at Khurai...

22 Apr 2014 - 8:05pm | Ma Prem Naina
It's about time...It's about change. But is not every election about change. Change promised but not delivered.This is a time when the world faces tremendous challenges for survival. Particularly...