City police have arrested two youths from the Gauhati Medical College Hospital premises charging the duo with misbehaving with a lady doctor and offering incestuous proposals on Saturday.

The incident took place at 1-30 in the wee hours when two Gorul Barman and Satyabrata Bora entered into the hospital premises at made an unfair proposal to a lady doctor on duty.

The doctor on duty reacted angrily where the attendants of the patients and hospital staff chased after him at the hospital premises.

After being overpowered, the duo were caught to be handed over to Bhangagarh police outpost.

The incident assumed significance at a time when the doctors have intensified demands for security following the AMCH incident where a wardboy killed a lady doctor on duty hour on Friday. 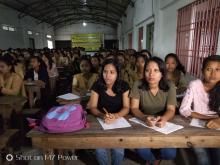 Discontent in BJP over new comers

7 Sep 2015 - 7:45am | AT News
Sense of utter disappointment is believed to have gripped a section of senior BJP leaders in Assam over the move of nine Congress MLAs to join the party striking secret deal with the central...