Our correspondent Guwahati
Latest reports have confirmed that The United Liberation Front of Asom (ULFA) has killed the Food Corporation of India (FCI) Zonal manager Phul Chand Ram in their captivity. Dr Ram’s dead body has been found on Saturday. He was kidnapped by the militants on April 17, 2007 while he was on his way back to the capital.

It has been learnt that ULFA was demanding a ransom of Rs 21 crores from Rams family but the police are yet to confirm it. Further details are awaited.

20 Jul 2009 - 9:16am | editor
A huge cache of arms and amminuion were seized during a joint operation by army and police from Mohanbari area at a from forest on Monday. According to information, acting on a tip-off, the team... 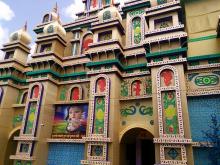 7 Oct 2016 - 9:56pm | AT Kokrajhar Bureau
Durga Puja celebration got underway in Kokrajhar, heart of BTAD administration along with rest of the state. Over 150 puja mandhap are erected in the district at different places. Kokrajhar main...

21 Dec 2014 - 9:49pm | AT News
Kokrajhar district administration conducted a cleanliness drive on Sunday to keep the environment clean and clear. Deputy Commissioner Thaneswar Malakar participated in the drive in front of the...