18 Dec 2016 - 6:37pm | AT Kokrajhar Bureau
Two persons trampled to death by wild elephants at Pub Gowamari early this morning in Baksa district on Sunday.  According to villagers, a herd of wild elephant come out from the nearby jungle... 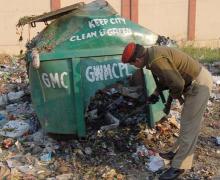 1 Jan 2009 - 8:51pm | editor
One person was injured when a minor blast took place in the city's Birubari area in the afternoon on Thursday. According to information, the bomb was planted inside a dustbin which exploded at around...