Yet another AIUDF leader is trying to join AGP. He is none other than Bijay Krishna Nath who was denied ticket from Silchar.

The former AIUDF leader is believed to have agreed to join the regional party provided he is fielded from Silchar in the upcoming Lok Sabha polls.

Self help week starts at ADBU 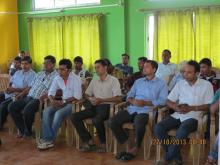 Gory clash: 3 of a family dead

8 Jun 2015 - 8:58am | AT News
Three people of a family died in a clash along the Assam-Meghalaya border sending shockwaves across the state on Monday.The gory clash took place at Phulbari on Sunday evening where a youth hacked to...