12 May 2009 - 10:33am | Juthika Das
As the researchers has been writing continuously that soft drinks are injurious to health and its bad effects, at Bhella area in Barpeta district found a packet of gutkha (Sikhar 1000) in a bottle...

6 Jun 2014 - 9:41pm | AT News
Union minister of state for home Kiren Rijiju is scheduled to visit Assam to take stock of the law and order situation on Saturday a day after an senior police officer was killed in KPLT captivity.... 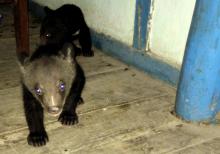