Properties worth one crore have been reduced to ashes when a devastating fire engulfed a lodged in Guwahati on Monday.

The incident took place at 2 in the afternoon in Birubari because of a cylinder explosion. Within a short period of time, the fire ravaged the lodge along with a four wheeler.

Fire tenders arrived in the spot. But by then the fire took its massive turn. The extent of loss is yet to be assessed.

27 Apr 2014 - 7:48pm | Hantigiri Narzary
Re-poll in nine polling stations in Kokrajhar parliamentary seat under 28-Gossaigaon and 29-Kokrajhar West constituency was recorded turn of over 76.41 percent which was held on Sunday amidst... 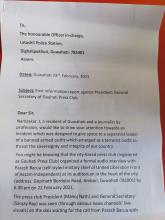 23 Feb 2021 - 5:20pm | AT News
Guwahati: Alleging that the city based press club had ‘designed to give space to a separatist leader of a banned armed outfit which emerged as a terrorist outfit to threat the sovereignty and...