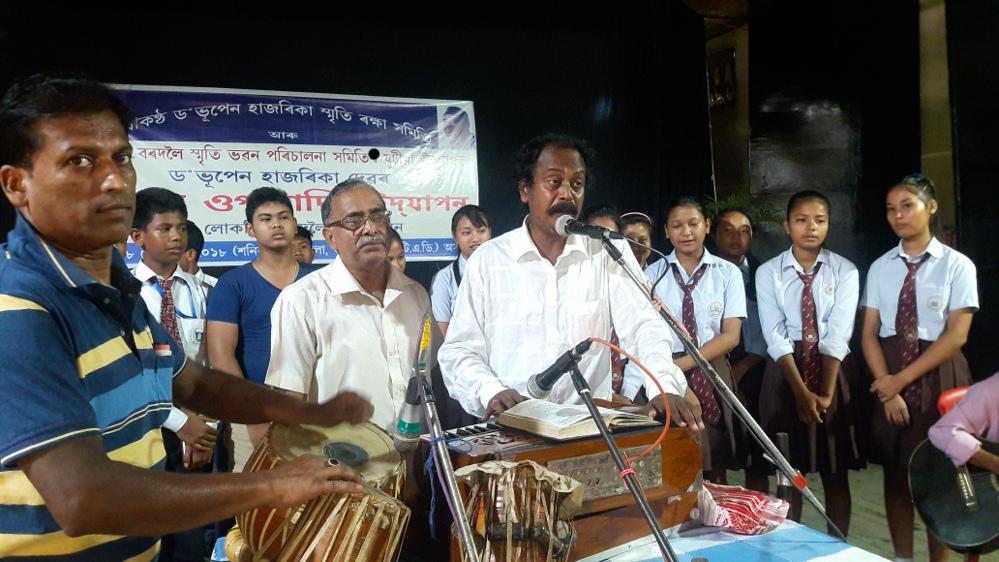 TANGLA: The people of the town paid rich tributes to the Dr. Bhupen Hazarika on the ocassion of his 92nd birth anniversary in a day long programme held here at Bordoloi Bhawan hall in Tangla on Saturday.The programme initiated with lightning of lamps by Academician,Binoy Kumar Medhi followed by floral tributes to the portait of the music maestro led by social worker,Likhan Das followed  by a host of litterateurs, noted citizens,school and college students. Speaking on the ocassion Binoy Medhi described the legendary music maestro as an apostle of universal brotherhood.Hazarika strengthened the fabric of communal harmony in the state, said Medhi.Remembering  Hazarika's rich contributions, Likhan Das said, "We need to strengthen our society based on the dreams of Dr Bhupen Hazarika by harmonising the people into emulating for a Bor Axom and celebrate its unity in diversity". He also exhorted the younger generations to grow by following the footsteps of Dr Bhupen Hazarika.A plantation programme was also held where educationist,senior journalist and lawyer,Dr. Keshab Ch. Dutta took part. A group of students performed  the immortal song  "Manuhe Manuhor Babe". Bhergaon SDO(C),Dithakananda Hazarika delighted the audience by performing on a number of songs of the Bard of Brahmaputra. He also took part on a  ceremonious cake cutting ceremony on the ocassion.

30 Mar 2022 - 5:44pm | Mithun Baruah
Acting on the tip-off, Excise staff carried out an extensive search and raided where they found and seized illegal IFML from Makum Bagan Tiniali and Station Para areas in Margherita.  Two...

24 Feb 2014 - 11:03am | AT News
Police have arrested at least 5 KMSS activists from different places in Guwahati for trying to disrupt the function organized at Sankardev kalakhetra to distribute land pattas for 500 families on...