Promonent environmental NGO of the region Aaranyak expresses its deep concern on some of the resort development activities at the Nimati-Kokilamukh area in Jorhat District, which is deemed unconducive for the presence of several threatened bird species and their habitat.

It is worth mentioning that the area where these resorts are being developed falls within the wetland and grassland habitat of some of the Globally Threatened bird species, such as the Swamp Francolin, Common Pochard, Marsh Babbler, Yellow-breasted Bunting among others. It provides breeding and wintering ground to more than 200 species of birds. The Nimati-Kokilamukh area falls within Janjimukh-Kokilamukh Important Bird Area (IBA), recognized by Birdlife International and Bombay Natural History Society (BNHS) as part of a worldwide assessment and home to as many as 26 Globally Threatened species of birds.

It is a major concern that these resorts are permitted to be developed at such crucial bird habitat and also being allowed to operate day and night, with loud music and assemblage of crowd at an unsustainable scale.

Mr. Udayan Borthakur, a wildlife biologist and Executive Committee member of Aaranyak, who he is a resident of Jorhat district appealed to the Deputy Commissioner, Jorhat District, through a letter for immediate review of the situation and stop such activities from further damaging the habitat and causing serious disturbance to the presence of rare and threatened species of birds. 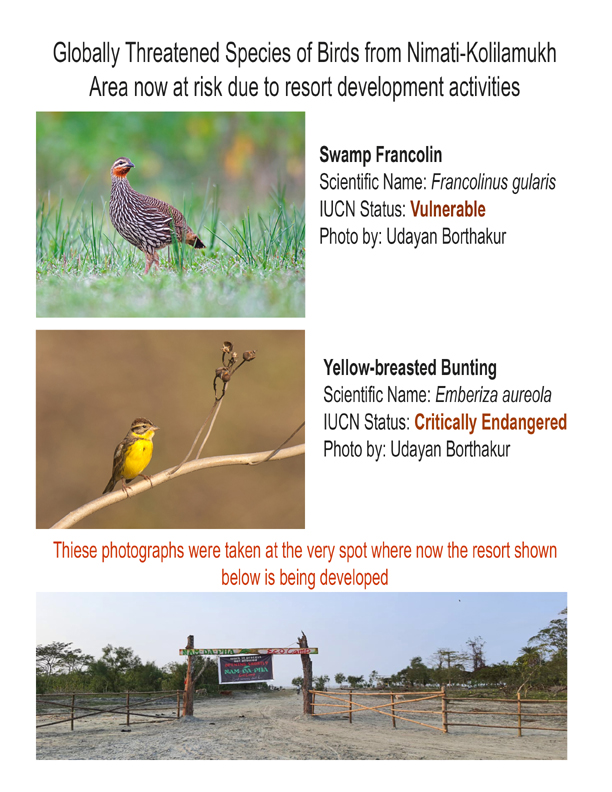 11 Jul 2014 - 9:46pm | AT News
The Narendra Modi government at the Centre has deceived Assam and its people if Chief Minister Tarun Gogoi is to be believed. Addressing a press conference in Guwahati on Friday, Gogoi said that the...