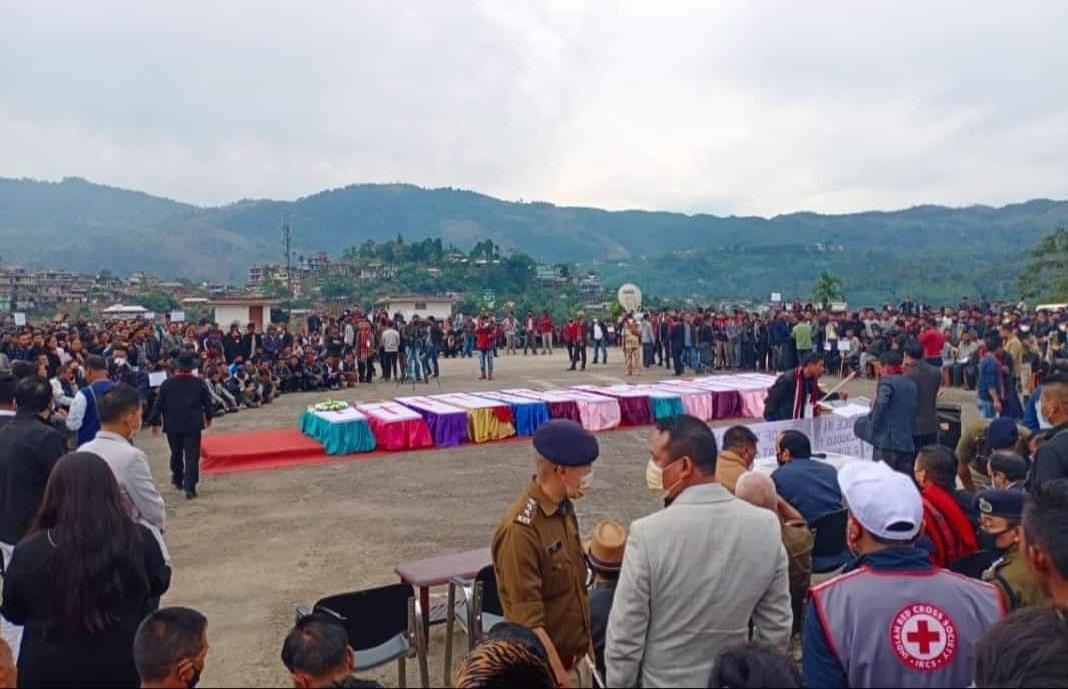 Guwahati: December 6: Manab Adhikar Sangram Samiti (MASS) condemns the brutal and senseless murder of innocent Naga wage earners and their protesting allies by the Indian armed forces. Even as our region prepares for the season of peace and festivities, special forces of the Indian army ambushed and killed young Naga men returning home to their village from working on the coal mines in the Mon district. News reports say that they were in a pick-up truck and singing songs, as they were happy to return home for the weekend on 4 December 2021. The army ambushed them between Lower Tiru, where they had gone to work in the mines, and Oking, where they lived. As per reports in the local media, six innocent Naga men died instantly, and two more succumbed to their injuries. Subsequently, the Indian armed forces opened fire on villagers from Oking and its neighbouring areas, who were searching for their murdered kin. The death toll now stands at 16 (sixteen), as per media reports.

This event is a reminder of the generational trauma that people of the Northeast, including the Nagas, continue to be subjected to. The Naga people were supposed to be safer following a ceasefire agreed upon by Naga armed opposition groups and the government of India in 1997. Instead, they have continued to suffer under threats made against them by the Indian security forces, who hide behind the grotesque law called Armed Forces (Special Powers) Act (AFSPA), 1958. The tragic loss of lives on 4 December 2021in Mon district, Nagaland, was a prime example of impunity that comes with AFSPA. Special forces units were emboldened by decades of immunity offered to them by this draconian law, so they saw no need to inform civilian authorities or even their paramilitary counterparts of the ambush of the innocent villagers.

In the meantime, this heinous action has elicited condemnation from every quarter, including India’s Home Minister, the Chief Minister, and Deputy Chief Minister of Nagaland. The government of Nagaland has constituted a 5-member Special Investigation Team (SIT) to investigate the massacre of innocent miners and their protesting kin. We welcome the elected representatives' effort and wish to sound a cautionary note about the fate of other investigations and commissions of inquiry following excesses committed by the armed forces against civilians in Northeast India. The Justice KN Saikia Committee report on extrajudicial executions in Assam and the Justice Upendra Singh Committee report on the killing of Thangjam Manorama has not been acted upon and have yet been acted upon to see the light of day. We cannot allow that to happen now.

MASS, therefore, makes the following demands as we stand in solidarity with our grieving Naga comrades:

19 Jun 2007 - 11:22am | editor
Our special correspondent from Guwahati : It was a tragic day for the Barman family. Jatin Barman,a resident of Guwahati has stabbed his wife, Bina Barman to death in the middle of the city at...