The AJP president today called on Akhil Gogoi at the Guwahati Medical College& Hospital, where he has been undergoing treatment for last 3-4 months.

After meeting the jailed Raijor Dal leader, Gogoi spoke to media and said that the newly floated regional parities would jointly fight in the upcoming assembly election.

“We, the AJP and the Raijor Dal formed an alliance. But we will not form any alliance with any national party or communal party,” he added.

Meanwhile, the Congress formed a pre-poll alliance with five other parties including the AIUDF. Many including noted intellectual Dr. Hiren Gohain, who also happens to be one of the advisers of the Raijor Dal, have openly called for a larger alliance of all the opposition parties against the BJP. 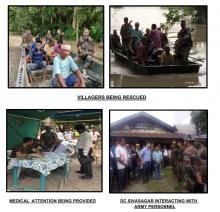 17 Aug 2009 - 4:14am | editor
Two suspected cases of H1N1 infection have tested negative in Assam hardly 24 hours after the state confirmed its first patient of the kind. Two persons, suspected to be infected by the killer swine...

25 Jan 2012 - 7:54pm | editor
During the British rule the Jorhat central jail was established in 1911. Preparation is going on to celebrate the completion of 100 years of this historic jail. The opening programme will be...