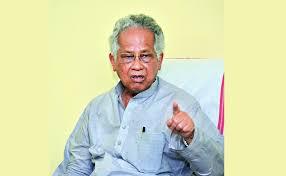 According to Guwahati Medical College Hospital authorities, the former CM who was rushed to ICU on Sunday midnight is properly responding to treatment.
Noninvasive ventilation system has been removed from him.
According to GMCH principal Gogoi is doing physiotherapy in the hospital and a team of doctors has been monitoring him.

His son and Kaliabor MP Gaurav Gogoi has arrived in the city of Guwahati and visited his father.  He told media that his father's condition was improving.

23 Apr 2017 - 7:41pm | Shajid Khan
The 25th Rongjali Bwisagu celebration which got underway on Saturday concluded here at Tangla on Sunday. The All Bodo Students’ Union (ABSU) Udalguri district commiittee along with Tangla...

18 Mar 2014 - 3:23pm | AT News
In yet another setback for Congress, Joiram Engleng joined BJP on Tuesday.Englang, the Congress leader from Karbi Anglong district joined BJP after Congress refused to let him contest from Diphu...