"We have not seen any difference as the most BJP workers are either truncates of the Congress or the AGP in our assembly constituancy," said a teacher when asked her about the poll-prospect of different parties in the upcoming election in their constituency. She is from the Teok assembly constituency that falls under the Jorhat Lok Sabha constituency. She added the only ruling BJP has till now election related activities. “We have seen any countable activity of the other parties. What we have seen is BJP's enthusiastic poll-related preparations," she further said. The Teok constituency is currently under the AGP's hold. The constituency was once a strong-hold of the regional party till 1996. In the 2001 election Congress candidates late Membor Gogoi triumphed trouncing the then AGP MLA, Renupoma Rajkhowa. From then to 2011, Gogoi represented the consitiuancy in the state assembly till 2001.  In his last assembly election in 2011, he defeated the then AGP candidate, Hemanta Kalita in a margin of around 29 thousand votes. In the 2016 assembly elections, Rajkhowa who contested as a BJP-AGP combine then, defeated Congress's Pallavi  Gogoi in a vote-margin of around 5 thousand. The assembly constituancy consists of four Zila Parishads and 19 gaon panchyats. Poll-data reveals that two mouja of the constituency out of the total six played pivotal role in the recent assembly election of the constituency. “In our constituency, no can predict which party will triumph,” said Naren Hazarika, a local veteran Congress worker.

Leeladhar Dutta, a retired government employee and a social worker said that no parties except the BJP have come to meet the voters in our constituency till now. “ Unlike earlier, now-a-days  we have felt strong presence of the BJP in our constituency. Many Congress and AJP workers have joined the ruling party. Some government scheme beneficiaries, who were earlier Congress supporters, also joined the BJP, ” he added.

Party sources revealed that Rajkhowa, the incumbent MLA of the constituency, may not contest in the upcoming election due to her growing age. Rajkhowa was elected to assembly thrice. She won in the assembly election for the first time in 1991 after the untimely death of her husband Lalit Chandra Rajkhowa, an Assam agitation leader who achieved the title 'Lion Man' from late prime minister Indira Gandhi. His wife also triumphed in the 1996 assembly elections.

Goyal’s budget: cheers for some sections of people

2 Feb 2019 - 9:56pm | Raktim Baruah
It is a tradition in the country that an interim budget excludes announcement of any kind of new policy or policies. But this time the NDA government at the Centre’s interim budget, which was... 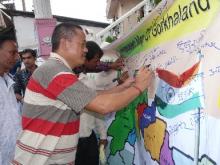 Signature Campaign for support of Gorkhaland

31 Aug 2008 - 1:49pm | Nanda Kirati Dewan
A mass signature campaign for support of Gorkhaland in West Bengal has been started off by Sahitya Akademi awardee Prof. Lil bahadur Chetri signing in the flex of map of Gorkhaland at All Assam...