Indian television is experiencing a new revolution in the form of reality shows. There is a deluge of reality shows in each and every channel that you turn on. MTV Roadies, Popstar ki khoj in Channel V, Big Boss a rip off from the British show called Big Brother of Shilpa Shetty fame, and the plethora of singing contests from Voice of India in Star Plus, Sa Re Ga Ma Pa, challenge in ZEE to the Indian Idol in Sony reality shows have captured the viewers imagination. The northeast has not yet forgotten the frenzy created by Debojit Saha’s victory in one such contest that catapulted the struggling singer into a house hold name overnight and now the northeast people are in crossroads once again to choose between two new contenders fro these parts that have reached the finals in this years Indian Idol aired by Sony.

Amit Paul from Meghlaya and Prashant Tamang from Sikkim are jostling for the winner’s crown in this show.

Perhaps the northeast is basking in the glory of unexpected national recognition that has come its way from these girls and boys who have succeeded in awakening the nation towards its northeastern brothers and sisters.

Thses shows have treaded into hitherto forbidden grounds and hit pay dirt with the successes of local talents. A year before it was Debojit who had united the people of the two valleys i.e the Brahmaputra Valley and the Barak Valley by procuring a record number of votes that led his winning the contest. Once again history is repeating itself with Amit Paul who has managed to bridge the gap of community divide in the minds of people of Meghalaya and has ushered in an era of peace.

His modest house in Shillong has turned into a temple of sorts where fans of all shapes and sizes, irrespective of age, difference in communities have become a fixture. They are voting for Amit Paul and praying for his victory. Similarly Prashant Tamang the constable from Kolkata police is trying to come to terms with the instant name and fame that he has brought for himself as well as for his home state Sikkim.

Whether these lads retain their new found glory is yet to be seen but what is heartwarming is the enthusiasm of the people who for once have forgotten their incessant differences and rooting for their new heroes and uniting to see them win.

Photo: People of Shillong breaking the barricade of caste and tribes gather at the Polo Ground in Shillong on 20-09-07 praying for the win of Shillong lad Amit Paul in the Sony TV's Musical reality Show Indian Idol Final. Pix by UB Photos.

Permalink Submitted by jaay on Sat, 08/12/2007 - 04:06
Finally, it looks like we are ready to make the mark on the national level. It is not that our presence was not felt, but now it looks like the impact is felt. There has been no dearth of talent within the region, but it was matter of being exposed. Anybody who feels that only telephone calls registered made the contestants win, should not forget that people Northern part have more presence and awareness than our part. I think the worthy contestant has won. Congrats to everybody and letÃ¢â‚¬â„¢s hope we have new dawn and future to look on to. 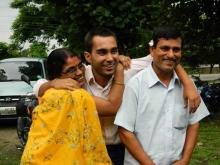 16 Jun 2012 - 3:06am | Koushik Hazarika
Board of secondary education Assam has announced HSLC result on Friday where bokakhat boy Gyandeep Sharma got first rank across among the state. Gyandeep passed from Sankardev Sishu Niketan,...

15 Aug 2012 - 3:38pm | editor
Assam chief minister Tarun Gogoi says on Wednesday that his government will continue the initiatives to help the state develope on all fronts. Unfurling the national tri colour at Khanapara in the...