This women’s day I salute those unsung ‘heroes’ who have withstood the onslaught of fickle fate. No they are not faces in the crowd rather they are the crowd whose faces we don’t remember. They are those who are living in the periphery of life, battling everyday issues of home and hearth.

I bow my head in reverence to the grit of Mausam’s mother who put aside her grief after losing her only son to Ewing’s Sarcoma in order to stand as a pillar of strength to her broken husband who unable to bear the tempest of misfortune had almost lost touch with reality. I like many others was a helpless bystander of the tale of woe that had fallen like a bolt from the blue on this poor family.  But their efforts of putting up a brave front and fight with the dreaded disease is a tale of inspiration. This iron lady put her fear and tears on hold to provide every possible treatment to save the apple of her eye. She did not have the embellishments of higher degrees nor did she have the cushion of riches to fall back upon, she along with her hard working husband undertook every possible effort to push back the tentacles of impending doom but their fate was sealed and when their little fighter lost the lone battle with cancer their world shook and time stood still. A life was lost forever but at the same time a new and stronger woman was born who had the power of perseverance and determination to fight every odd that life hurled her way. She is truly the embodiment of ‘Shakti’ and i wish to revere her every quality.

Next, i applause the transformation of another spirited woman whose ‘frail to fearsome’ tale is one which has many  lessons to teach. This is the story of a woman scorned and the consequences thereof. I remember many nights when our neighbourhood would reverberate with the painful shrieks of a woman mistreated by her husband.

But soon a new sun dawned on her life when she took matters in her own hands and put a stop on the atrocities inflicted upon her by her husband. The transformation of this woman was simply remarkable. Today this single mother is juggling a profession and being a mother with elan. She has freed herself from the obligatory tag of being a ‘tag along to a wife-beater husband’. There are millions of women out there who are facing extremities in the form of abusive husbands or in laws but there are not many like this feisty woman who have the gall to leave the security of a settled life to embrace the uncertainties of an  unknown future. Pat on the back of this gutsy woman kudos to the fighter in her.

Meet Rubaiyya fondly called ‘didi’ by everyone in our apartment.  Mother of four this woman is a powerhouse of qualities. Her day begins at the crack of dawn when she hurriedly cooks and cleans for her family and works at the nearby apartment as a part time help for almost all the nineteen flats. Years have come and years have gone but this woman has not aged a day since she came into our lives. She continues to work single-mindedly trying to make ends meet. Her husband, an out of work alcoholic is dependent on her as well.  Not for her the rustle of silk clothes, not for her the shine of ornaments but her dream is to educate her four children so that they get to carve a better future for themselves. Living amidst unknown people this woman is in an everyday strife with life at the well—when she has to collect water for her family, with the landlord who hikes the rent every month at small pretexts, with the nagging people of the apartment who try to find faults at her flawless work and at home with her loving husband who frequently turns into a drunken monster. I  believe she is a true woman of substance living life by meagre means.

I salute these common woman whom we find at every corner of our lives but whose uncommonness we fail to fathom. I salute this ordinary woman in who lurk extraordinary powers of tolerance, determination and strength. 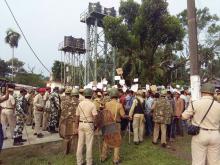 6 Sep 2019 - 9:05am | Nikhil Mundra
Hojai District Unit of Centre Indian Trade Union (CITU)  took out a rally on Thursday as a mark of their protest against the move of central government on Labour Law reforms. The rally after...

My Waxen Wings
I, Kaziranga
A day for Women!
Assam - a killing field for the wild
Prevent Animal Sacrifice this puja
Mobile phone radiation: A health hazard
Mob dynamics
Kameswari festival in Kamakhya
Animals in captivity
When Bamboo Flowers