AGP and BJP are not happy with the poll schedule announced for Assam by the Election Commission on Wednesday.

Both the parties would request the country’s poll panel to reconsider the schedule.

AGP and BJP leaders said that Ashokastomi falls on April 7 when the polling will take place in Jorhat, Dibrugah, Kaliabor, Nagaon, Tezpur and Lakhimpur.

The Opposition parties have alleged that the country’s poll panel could not assess the scenario in the absence of proper interpretation of the state Government. 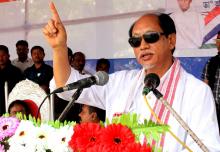 2 Apr 2014 - 8:10pm | AT News
Nagaland chief minister Neiphu Rio on Wednesday urged the people to vote for AGP in the upcoming Lok Sabha polls.Addressing a poll rally in Majuli to campaign for Lakhimpur AGP candidate Hariprasad...

6 Jun 2007 - 5:30am | pbaruah
NEW DELHI: All ten members from Assam have come out of the delimitation panel saying they will not be responsible if anything happens in future even as the Commission gets ready for public hearing in...