A 12 hour Darrang bandh seems to have paralyzed normal life in the entire district on Thursday.

Bandh supporters are trying to block the normal movement of vehicles by burning tyres on the National Highway from the morning.

A section of the bandh supporters pelted stones at some vehicles forcing security forces to intervene with blank firing in Mongaodoi.
At least 5 persons including journalist and policemen have been injured in the attack by bandh supporters.

Assam Muslim Yuva Pariashad called the down to dusk bandh in protest against the Thursday’s group clash in Kalaigaon. 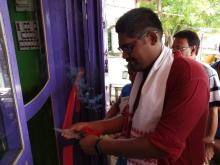