After Narendra Modi, now its turn for Mamata Banerjee to take on Tarun Gogoi government.

The Trinamool Congress president on Wednesday lambasted his Assam counterpart alleging his failure on all fronts. “There is nothing in the name of law and order in Assam. Its shameful governance in Assam,” said the former Union minister.

In her scathing attack on Dr Manmohan Singh, Banerjee said that the prime minister represents Assam in parliament, but how many times he visited his second home state. 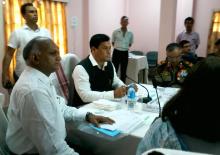 7 Aug 2016 - 1:33pm | AT News
Assam Chief Minister Sarbananda Sonowal has condemned the firing and bombing on the common people by militants in Kokokrajhar on Friday.Sonowal, who was on a stock taking visit to Kokrajhar on Sunday...