The Hatipoti Bridge of Nazira Galekey road was cracked down last month creating a lot of problems to the commuters. Local people have been demanding for construction of the bridge by the ONGCL for a long time.

In a tri-party meeting of the ONGCL, S.D.O. (Civil) Nazira & representative of different organizations, the ONGCL declared to provide 12 lakh 27 thousand rupees for re-construction of the bridge. The ONGCL are also agreed to construct a sub way near the said bridge.

AKRSU eyes to be reunification

24 Oct 2015 - 6:37pm | Hantigiri Narzary
After a long year scattered working in the students union, the All Koch Rajbongsi Students Union (AKRSU ) both faction Hiteswar Barman and Biswajit Ray expressed their willingness to be reunification... 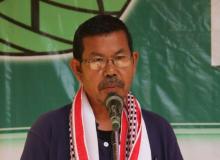 3 Apr 2018 - 8:09pm | AT News Imphal
IMPHAL, Apr 3: Condolences continued to pour in from different quarters over the death of senior journalist Khelen Thokchom of Manipur. On Tuesday, the All Manipur Women’s Development Forum in a...