Security forces claimed to have killed a hardcore NDFB(S) militant at an encounter in Sonitpur district on Sunday.

The encounter took place in Moinajuli area at 7 in the afternoon where the militant died on the spot. Police further claimed to have recovered weapons from his possession.

No trouble for Gogoi govt: Brahma

2 Sep 2015 - 9:25am | Hantigiri Narzary
Former minister and BPF leader Pramila Rani Brahma has claimed that ruling Congress government in the state has nothing to be worried at all. Talking to reporters in the sidelines of a function... 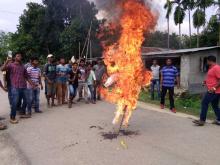 Gogoi hopes gas cracker project to be completed in time

15 Dec 2008 - 3:38am | editor
Assam Chief Minister Tarun Gogoi said the gas cracker project at Lepetkota in Dibrugarh would be completed in time . The Chief Minister on Sunday visited the multi-crore project and reviewed its...