Gullu Das is disappointed. Same it is in the case of Bichitra. Pobitra confines himself into his own home. What makes them upset. They are vendors of pan masala (Ghutka).

With this business, the have been living from hand to mouth for the last ten years. From Thursday, they have hardly any means of livelihood.

They are remaining helpless as soon as the government banned ghutka across the state from Thursday. The Assam Government on Wednesday told the Assembly that the Bill to ban the smokeless ghutka has got ascent from the governor.

“There is no dearth of means for their livelihood. Why they don’t concentrate on other business? Let them sale news paper, let them sell magazine. That would be more lucrative,” said Rajen Das in Saromotioria area who has been supporting the bill to ban tobacco.

Another citizen in Lachitnagar area Piyush Kalita told Assam Times that lots of business are there to provide the ghutka vendors with bread and butter. Do they think that they have been carrying health hazard?

Labanya Das, a housewife said that this is not enough. The government should ban the smoking tobacco at the earliest. Then and then only, the main objectives behind the initiative would work.

This is how, a cross section of the people reacted after the government has enforced the ban on ghutka from Thursday.

2 Aug 2020 - 12:49pm | AT News
Tezpur: After Padma Hazarika, now it's turn for Mrinal Hazarika to wage a war against the illegal settlers. Talking to reporters in Sootea where a group of police and civil officials sustained... 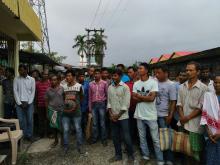