Gogoi to visit Nazira on Saturday

Chief Minister Tarun gogoi will visit Nazira on Saturday to lay foundation stone of Nazira Women Politechnical School at Chakimukh. He will also address a public meeting at Chakimukh high school play ground at 11 AM. Nazira administration has tightened the security for the programme.

BREAKING NEWS : Boy suspected to be from Assam arrested in connection with Hyderabad Blasts

28 Aug 2007 - 8:12am | editor
Hyderabad : Mohammad Abdullah, one of the suspects rounded up for interrogations in connection with the Hyderabad blasts reportedly told police that he hails from Nagaon district in Assam.Assam...

29 Nov 2015 - 4:08pm | Hantigiri Narzary
A women empowerment workshop was organized at Nagrijuli of Baksa district today to create awareness about uplift of women among society. Hudreds of educated women from various parts of the area... 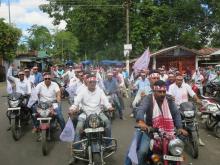 15 Oct 2015 - 10:29pm | Siddhartha Handique
Golaghat BJP unit workers hit the streets in the town on Thursday alleging scams, corruption and misgovernance by the Congress government in Assam. Hundreds of protesters took out a rally...