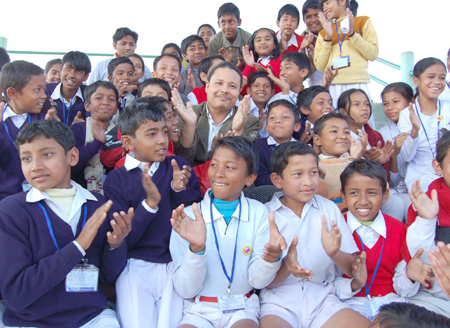 Children enjoying some light moments with populer singer-music director Manas Robin during the 12th biennial conference of All Assam Moina Parijat, the biggest childrens' body of Assam at Sivasagar on 04-02-2008.

8 Nov 2014 - 6:57pm | Hantigiri Narzary
The Commissiner, Lower Assam Division Sabbir Hussain visited Chirang district on Friday as a Roll Observer in connection with the Special Summary Revision.Hussain during his visit, held a...

Respite in store from heat waves!

29 Jul 2015 - 9:43am | AT News
Some sort of respite is in store from sweltering heat wave across the state on Wednesday if the weathermen are to be believed. The paralyzing heatwave is likely to be over by the evening as there is...

Rio proving majority on the floor

13 Mar 2018 - 7:26am | AT News
KOHIMA: The NDPP-led Nagaland government is facing floor test in the special assembly session on Tuesday a week after Neiphu Rio along with 11 others were sworn in. Before that  the new members...