The BPF candidate was in a mood to withdraw the nomination citing lack of strength. But finally, he agreed to contest after Gogoi’s assurance of strategies for his smooth sailing.

But APCC president Kalita spoke differently on Friday. He said that the party can’t assure the BPF leader of victory.

30 Nov 2016 - 8:30pm | AT Kokrajhar Bureau
Security forces belonging to police and army apprehended a linkman of NDFB (S) from Dhanpur area under Kachugaon PS in Kokrajhar district early this morning. Based on information about moving... 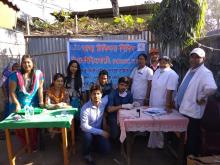