The Assam Environmental NGO Forum comprising of thirty environmental NGOs of the state working for the conservation of flora and fauna of Assam and NE region in its annual session appealed Supreme Court of India to establish a permanent bench of Green Tribunal in Guwahati city for Assam and NE states in view of the deteriorating deforestation. The annual session was held at Bhagawati Prasad Barua Bhawan of Assam Sahitya Sabha in the city on January 19. The annual session was presided over by noted environmentalist Moloy Barua. Green Reporter Mubina Akhtar also the co-ordinator of the the forum in her welcome speech thanked its member NGOs for doing conservation activities including fight for the protection of rhinos and wild elephants in the state. The forum members after detailed discussion adopted the following important resolutions for the speedy conservation betterment.

Firstly,the forum requests Hon'ble Supreme Court of India to open a permanent bench of its Green Tribunal in Guwahati for NE region. Secondly,the forum opposes allotment of forest and wetlands in Guwahati and in the state. The forum said that allotments of wetlands and hills in Guwahati must be scrapped immediately and government must evict all including social organisations which had been allotted such lands by goverments.Thirdly the forum requests Assam government to allot lands to people who had been residing in Dibru-Saikhaowa National Park since 1950 ( forest villages) as the people were willing to vaccate their villages in the greater interest of Dibru-Saikhaowa NP. Its need to mention that three forest villages inside Dibru-Saikhaowa NP had been willing to vaccate NP villages in the greater interest of the National Park. 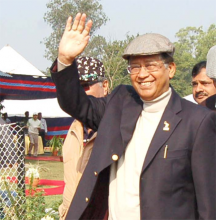 BREAKING NEWS: Top ULFA leader suspected to be killed in encounter in Dhubri

30 Aug 2007 - 4:13am | BandanBharadwaj
Dhubri : A top ULFA leader has been reportedly killed in an encounter with security forces at Motirkuta sub locality under Gouripur in Dhubri district.Security forces patrolling the area noticed a...

27 Nov 2013 - 9:00pm | AT News
The minor boy critically injured in the Bongaigaon blast died in Guwahati on Wednesday.      The three year old boy died three days after he was rushed to the Guwahati Medical...