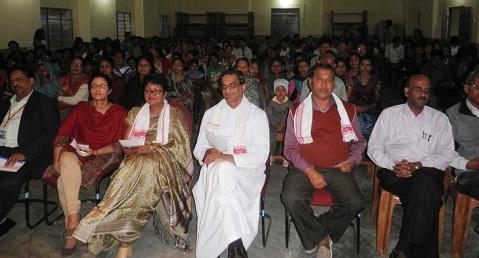 Assam Don Bosco University students held the annual day for tutorial students and their parents at ADBU Auditorium on November 26. Among the guests of honour were the Vice Chancellor and principal of the School of Technology along with Asha Bora and Azara Gram Panchayat President  Prabin Medhi. Vice-Chancellor Dr Stephen Mavely congratulated the students and faculty of both Schools of Technology and Social Sciences for organising the free evening coaching classes for high school students of the locality. Social Activist  Bora congratulated the Vice-Chancellor for the initiative and encouraged both students and faculty for their noble act toward the weaker students of the locality. “We are blessed with the presence of DonBoscoCollege and University in our Panchayat,” said  Medhi listing the progress made in just five years.

“What started off as outreach programme by some students of Assam Don Bosco University (ADBU) seven months ago, as evening coaching classes for 11 high school students from Azara Gaon village, to day the project has more than 130 students spread out from classes 7 to 10,” recalled Principal of School of Technology Prof Manoranjan Kalita.

Christened SWASTYAYAN (commitment), the project, started by ADBU’s School of Social Sciences, Department of Social Work, was initiated to extend support and motivation among the children of communities in Azara Gaon Panchayat.

“It mainly aimed at providing them with tutorials in subjects like Mathematics, Science, Social Sciences and English, besides taking care of their growth and developmental needs as adolescents in a climate of rapidly changing and often hostile environment,” says project coordinator  Victor Nazary of W department.

He adds, “Apart from academic inputs, the neighbourhood students were taken through a series of sessions on goal setting, time management, life-skill development, spoken English tutorials, recreation, games and sports that were intended to enthuse and enhance their overall personality and self-esteem.”

Various competitions in recitation, poetry, acting, singing, dancing, and drawing were conducted to identify the students’ talents so that their skills could be further honed.

The outstanding element of the programme has been the whole-hearted involvement of ADBU student communities of both Schools of Technology and Social Sciences.

Though it has been initiated and successfully run by the students of the Social Work Department, over a hundred students from the School of Technology participated as volunteers to teach, motivate, encourage and inspire the children from the neighbourhood.

Home-visits carried out in the communities, by the students of social work, have revealed peoples’ appreciation, gratitude and goodwill towards the programme, volunteers and the University.

The Swastyayan team conducted the Annual Day Programme, 26th November 2013,  to acknowledge and appreciate the dedication and efforts of the volunteers, on the one hand, and to gesture to the children and their parents that they’ll need to continue the good work with seriousness and dedication while preparing for their examinations in the coming days.

After an exploratory study to access the perception of ADBU students and faculty in undertaking a social commitment programme in the community the organizers initially got 30 participants to volunteer.

The student volunteers proceeded on a door to door survey in four localities of Azara Panchayat to collect names and details of class 9 and 10 students willing to join the free tutorial.

In keeping up with its commitment to eradicate social evil of high school dropouts in the neighbourhood, ADBU extended its state-of-the-art classroo for the tutorial.

While several personality development sessions, recreational programmes and competitions were conducted to bolster the students’ growth and development, the volunteers had motivational and tutorial skilling sessions.

Recent home visits conducted reveal that the children, parents and community people are “highly satisfied by the service provided by the university through Swastyayan.”

Some of the parents suggested that “if the students could be taught English well, they could do well in other subjects too.”