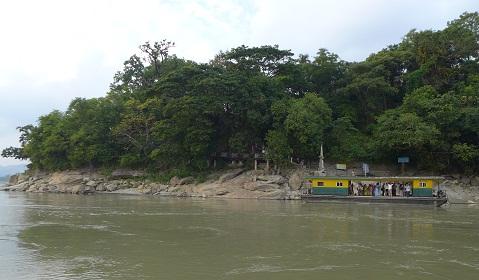 Assam being one of the cardinal states amongst the eight Northeastern states of India is regarded as the gateway of Northeast India which is blessed with ample natural resources in the form of green and mineral reserves, water bodies and flora and fauna. Even though there are several ethnic societies in Assam, Assamese is the official language. The lush green tea plantations and rich petroleum production across Assam along with the one horned rhinoceroses make Assam a very popular state in India.

With such abundance Assam reserves to be included in the tour itinerary of any tourist who feel like exploring India to the fullest. Assam is surrounded by Nagaland, Manipur and Mizoram to the South and also shares the Northern and Eastern boundaries of the state with Bhutan and Arunachal Pradesh respectively. West Bengal, Bangladesh can be found to the West with Meghalaya lying towards the South-Western part.

The tourism industry is a growing service sector in India, which contributes to 6.23 per cent towards nationwide GDP. Lying at the center of the world’s wealthiest bio-geographic regions, Assam is rightly endowed with nature and has the appreciable possibilities for developing into a compelling force if tourism is encouraged as a thriving industry. With loads of economic resources, rich cultural and ethnic heritage, the state of Assam has gradually grown into a hub of tourist destination, thus producing abundant income and job possibilities across Assam, which is outlined by its rich flora, fauna and biodiversity.

In Assam, the Government and the other establishments have taken up numerous strategies and initiatives to advertise tourism which is the fastest growing market here in Assam. It has remarkable sightseeing attractions, hill stations, water bodies, rich wildlife parks that include fifteen wildlife sanctuaries and five national parks. The number of tourists from India and overseas are on the high every year. The state also provides a lot of opportunities for the sports enthusiast.

Assam offers ample opportunities for adventure loving tourists and random visitors because of its undulating tea gardens and green forests, natural scenery, rich wildlife and places of pilgrimage in and around the state. Apart from these, the state is a store house of medicinal herbs and plants, ornamental fishes, exotic plants along with serene and idyllic places such as Deepor Beel, Barnadi and many others.

This apart historical buildings like the Rang Ghar, Kareng Ghar, Joysagar, Joy Doul; places like Sonitpur (Tezpur), Garhgaon, Jerangapathar, religious temples like the Kamakhya, the Umananda, the Agnigarh and the Mahabhairavi temples and hill stations like Haflong, Badarpur and others are places that attract people not only from inside India, but also from abroad.

Eco-tourism plays a major role in preserving the natural and cultural assets and in cherishing the traditional aspects that exist. Even though there are different cultures in respect to attires, rituals, rites as well as the festivals, the people of this state live in harmony and with peace. The legacy of the traditional crafts and art in Assam along with the production of different types of Silk products such as the Golden Muga, the White Pat and the Warm Eri are sought after. And as the spring arrives in Assam, the shuttles of the loom are a common sound in the villages.

The tourism sector is graced with a major growth after the termination of the Restricted Area Permit (RAP). A host of action plans and schemes have been carried out by various authorities under the tourism sector that works with the State Government for enhancing or boosting the infrastructural provisions as well as the natural and wildlife resources. Diversified outcomes and all round progress in the field of infrastructure as well as relevant facilities have been evidenced by the State Tourism Department with the financial support from Central and State Government of India. Tourism Circuit Development, Destination Development and Wayside Amenities has been given notable importance for the development of the tourism sector by undergoing public and private partnerships.

The Assam Tourism Policy 2008 by the State Government of Assam sets the tourism sector on a top concern for the financial and economic growth, enhancing the tourism potentials and the quality of the current tourism items, advertising infrastructure of international benchmark, motivating Public-Private Collaboration in the overall development of tourism and so on. This policy has created a new era and sphere for the big shot entrepreneurs and has also enchanted many companies like Indian hotels Company Ltd (Taj Group) for coming up with a 5 star hotel in Guwahati City. The Guwahati airport has also grown up into one of the busiest airport hub in the entire North-Eastern India that connects to all the metropolitan places of the country.

It is clearly evident that the tourism sector of Assam has got a lot of potential for making up good amount of money as well as livelihoods for the people, but because of some constraints it is not able to see the developed phase such as infrastructure disadvantages, barriers in communication, geographical isolation, cultural situations leading to governmental uncertainty, growth of rebel activities, deficiency of fund from the Central Government, faulty socio-economic and governmental set up, deficiency of appropriate travel and tourism development policy of the State Government, deficiency of appropriate friendly investment environment and absence of good-natured circumstances to attract tourists.

To conclude growth of the tourism industry in this state mostly relies with the development of conventional policies leading to the enhancement of the tourism department and all round individuals' co-operation and awareness. Further, a sincere and powerful determination of the Government of Assam in addition to the genuine involvement of the residents of Assam will definitely enhance the tourism market in Assam in the near future.

10 Dec 2013 - 7:35pm | Syed Miraz Ahmed
Canada based Human Concern International Sunday sponsored scholarships for 51 students in Assam to pursue MBBS. The scholarships were awarded in a program organized by Markaz-ul-Ma’arif, a voluntary...

27 Jul 2018 - 6:26pm | Shajid Khan
UDALGURI: The tea garden labourers of 24 tea gardens under the jurisdiction of Assam Chah Mazdoor Sangha(ACMS),Mangaldai Branch staged two hours protest programme from 6 am to 8 am in front of their...