Massive population growth is a serious problem distressing resources worldwide today. Natural resources are one of the most vital items that the human race lives on. The environment is a threshold of raw materials that can be produced into the basic necessities for every individual use. But with time it has become important to safeguard the environment. Despite its importance, there are observable threats that have emerged with regards to the consumption of natural resources. One of the most remarkable obstructions that pose as a grave danger is the increasing population of the world, which is fast becoming the reason for the depletion of natural resources.

The population pattern of the world has been continuously growing from the year 1400 although the most significant increase has been in the last 50 years, mainly due to medical advancements and increases in agricultural productivity. This explosive growth came about because death rates fell faster than birth rates. A rise in average life expectancy has also contributed to the surge in human numbers. The recent rapid increase in human population over the past three centuries has raised concerns that the planet may not be able to sustain present or larger numbers of inhabitants.

The effects of overpopulation and the depletion of natural resources is inter related. Depletion of natural sources is one of the most critical problems the world community is facing, especially after the sharp increase in the world population during the last century. Each person has a number of vital and nonvital requirements all of which require consumption of the earth's resources. As natural resources are becoming scarcer, production ventures shrinking. However, in an overpopulated society, demands sore. This causes prices of goods to rise in a bid to balance the demand and supply chain. An extreme scenario of critically depleted natural resources combined with an extremely high consumer base is scarcity. It this case, production becomes so low it cannot even cover the needs of those consumers accepting extraordinary prices. In overpopulated societies, the number of people available and willing to work is high. However, if the local economy doesn't have the ability to expand and include the ever-growing work force, then the result can be widespread unemployment.

The twentieth century has been a century of unprecedented population growth, economic development and environmental change. There has been extensive debate worldwide on the relationship between population growth and depletion of resources in the past few years. The world population grew by four times from 1.6 billion to 6.1 billion persons between the years 1900 and 2000. Rapid population growths and developments occur unevenly throughout the world coupled with increasingly unsustainable utilization of world’s natural resources maximizing adverse impact on the environment.

During the past few decades there has been phenomenal increase in population in India and it has taken place even in relatively land abundant arid and semi-arid states such like Rajasthan and Gujarat. India accounts for 18 per cent of the world population, and is growing at 1.93 per cent per annum. India supports its population with only 2.3 per cent of the world’s land area and 1.7 per cent of the world’s forest. Even though India recognized the problem of rapid population growth soon after independence, it has limited success in controlling its growth rate. The consequences of such a population pattern for India span three areas; changes in land use, increase in toxic chemical released to the environment and depletion of natural resources.

The Northeastern Region of India is rich in natural resources and biodiversity zones and is the host to primary natural resources of the region. The region also recorded rapid population growth and high incidences of poverty since independence compared to other regions of the country.

The population of Assam is growing at an alarming pace. Population growth instead of becoming an asset, has become one of the most important constraints for economic development in the state. Assam along with other states of India is facing a situation which may be described as population explosion. From 1951 to 1991, the size of population in Assam has increased from 80 lakhs to 224 lakhs.

Assam with a total geographical area of 78438 kilometre square is rich in land resources. Its vast fertile alluvial tracts and low hills with suitable climatic condition offer excellent condition for utilization for different purposes. The pattern of land use in the state witnessed tremendous change in last few decades. Burgeoning population aided with modern technology is the reason behind rapid change in the way land is used in the state. The effects well reflect the forms of ecological imbalance and land degradation because of soil erosion. Forest areas have been decreasing due to encroachment for agricultural use. There are conflicting reports of areas under forest and degraded land as claimed by the government and that revealed by other national agencies. The Assam area legally notified as forest area is 3071 square kilometres accounting for about 39.1 per cent of the total geographical area of the state. But the actual forest cover based on the imagery (1990) is only 21.9 % of the total area. These differences clearly indicate the change in the nature of land use in the state. The horizontal growth of settlement due to rapid growth of population and the resultant growth of other developmental activities also leading to a slow but continual change to the pattern of land use in a different scale.

The growth in population has cascaded land acquisition by man. Land full of vegetation and forest were cut down to make way for its agriculture, habitation and business.

The land surface is now under strenuous strain with its forest cover depleting a vered with poisonous wastes. areas and  covered with poisonous wastes. Efforts for afforestation must be given utmost priority by different government agencies, NGOs and institutions to increase forest cover. Schemes will have to be adhered to keeping with the environmental guidelines set and existing industrial houses should set aside sufficient funds to treat waste products from their factories. 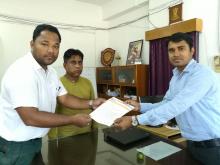 23 Nov 2017 - 8:52am | Mithun Baruah
The Margherita Journalists Association submitted a memorandum to the Prime Minister  through the Margherita Sub Divisional officer(Civil) to disclose the Naga framework agreement which was...

Green Marathon at Bokakhat on June 5

27 May 2012 - 1:07pm | editor
Aaranyak, a society for conservation in Northeast India, in collaboration with Bokakhat District Master Athletic Association, Assam Forest Department and Bokakhat Civil Administration is planning to...