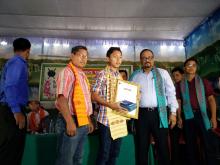 8 Oct 2015 - 8:52am | AT News Itanagar
The East Siang unit of All Arunachal Pradesh Labour Union (AAPLU) has struck deal with Third Eye Computer Education to provide free of cost computer training to unprivileged youths. Both the parties...

26 Jul 2010 - 5:34am | DigantaTalukdar
The NH Charitable Trust of Nagaon donated a Maruti Van to Uttar Kamalabari Satra of Majuli on Sunday at a function held at Nurul Amin Stadium, Nagaon. Assam Forest...