At least nine workers from Assam were killed and 11 injured when suspected militants triggered a powerful IED blast at Khoyathong in the heart of Imphal on Friday. Six others have been critically injured. The bomb exploded at 7.35 in the evening inside a camp where the labourers housed. Nine workers died on the spot.  Police called it an IED planted by militants. This has forced the security forces to step up vigil in the capital city. 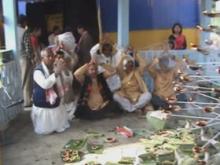 25 Feb 2018 - 6:15pm | AT News
KOKRAJHAR: Job hunters thronged in thousands at Kokrajhar as the BTAD headquarters hosted the viva test for recruiting fourth grade employees in the health and family welfare department....