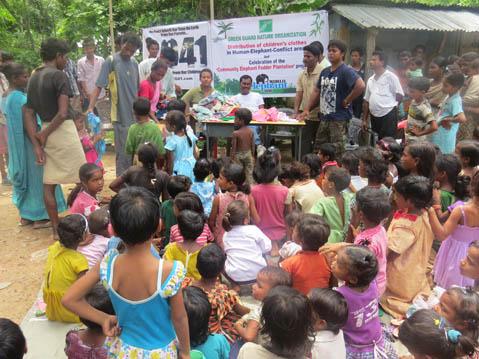 Green Guard Nature Organization organized 'World Elephant Day 2013' program amongst fringe forest communities affected by intense Human-Elephant Conflict (HEC) at the Karbi foothills, near Chapanala, Nagaon. Over 200 children from fringe forest communities were provided clothes donated to our organization by Mr. SarwanDeep Singh from Delhi, at a ceremony at Samasya line, Lungsung, in the presence of Forest staff, Lungsung T.E. manager and staff, village elders & women from several nearby villages. Around 50 banana saplings & stumps were also planted under the ongoing 'Community Elephant Fodder Plantation' program 2013 to mark the 2nd World Elephant Day, which is a global event organized on August 12 to spread conservation awareness about elephants. 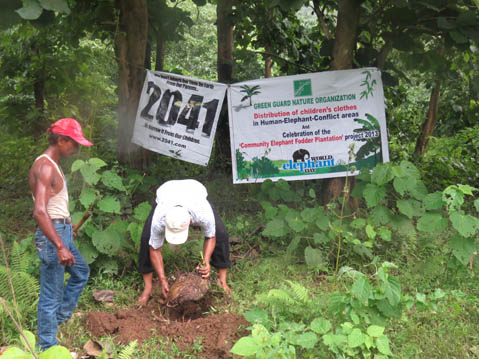 These areas are close to the Kaziranga-Karbi Anglong Elephant Reserve where traditional wildlife corridors have been converted into rubber and tea plantations and the elephant habitat has been degraded by rampant, illegal logging.  Several incidents of elephant poaching have been documented in the Karbi foothills by our organization in recent years. Involvement of these fringe forest communities in HEC mitigation efforts have reduced retaliatory action against elephants to a minimum and is also expected to improve the anti-poaching information network. Distribution of children's clothes is a motivational initiative, specially for the whole-hearted support of these communities to the Green Guard Nature Organization initiated project for plantation of elephant fodder during the last few weeks.

NDFB-S not against peace process

14 Sep 2015 - 3:52pm | Hantigiri Narzary
The Songbijit faction of the NDFB said that the outfit organisation has not been stepping against peace process, but wanted it should not beat the cost community interest. The remark was...

3 Dec 2015 - 6:47pm | Hantigiri Narzary
Commemorating the 100 years of Boroni Phisa O' Ayen(Son of the Boros & its Customary Laws), the first printed book in Bodo language, the Bodo Writers' Academy is celebrating the occasion with a...