The Gauhati High Court has ordered the Central Bureau of Investigation to probe into the controversial killing of FCI officials Dr PC Ram. The FCI regional director, who was kidnapped by the ULFA, was killed in a mysterious condition in the night of July 11, 2007. The government has claimed that he was killed in a cross-fire but Dr Ram’s family members alleged that the killing was pre-planned. Taking up a petition filed by his brother on Friday the Gauhati High Court asked the CBI to file an affidavit on the case.

Echo of a Pyre

19 Apr 2020 - 10:53am | Dr Aniruddha Babar
I wake up in the middle of the night All drench in sweat with fear That dream that I was seeing I realized am living this year   World is set on fire Humanity is burning God... 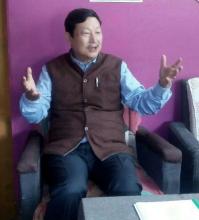 30 Apr 2014 - 9:26am | AT News
Security forces seem to have intensified counter offensive against NDFB-S in Sonitpur district where the Bodo insurgent outfit has been unleashing terror in the form of extortion, kidnapping and...