Shortage of doctors and paramedical staff and lack of basic amenities is crippling services at the Dhubri civil hospital at Jhagrarpar on the outskirts of Dhubri town, a report sent by the hospital authorities to Dispur revealed.

The 200-bed government hospital that caters to about 1000 patients daily has to make do with just 18 doctors and 44 GNM nurses, which is in violation of the National Rural Health Mission guidelines of 2007.

The NRHM guidelines state that a 101-200 bed district hospital should have at least 34 doctors and 75-100 staff nurses.

According to the report submitted to health minister Himanta Biswa Sarma by superintendent (in charge) Abdul Motin Sheikh recently, the hospital does not have a pathologist, radiologist, orthopaedic surgeon and forensic expert. It requires at least 77 GNM nurses and 21 more grade IV employees. Besides, only eight sweepers against the 30 sanctioned posts are currently working at the hospital.

The hospital building, according to the report, a copy of which was made available to this correspondent recently, is unscientific and unhygienic because of faulty construction, “no” drainage and insufficient water supply to the latrines. The hospital runs with just four “ten-year-old” ambulances that often break down while transporting patients to Guwahati.

Besides, there has been no supply of cotton for the past two years. Currently, the number of other emergency items such gloves and needles are shown “nil” in the report with blood transfusion sets available only once in a while. The medicine store too is in a bad state with thefts occuring quite frequently,” report further stated.

The civil hospital is the only resort for poor patients from poor families of Dhubri district. 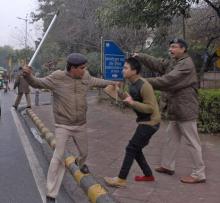 14 Feb 2014 - 6:45pm | AT News
Delhi police have detained at least 25 north eastern students when they staged dharna in Vijoy Chowk demanding justice for the Nido Tania, who was killed by goons in Lajpotnagar. The students,...