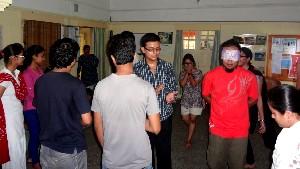 Foundation for Social Transformation organised a creative drama workshop on 14th June at its premises. This programme was mainly organised for youths who are interested in drama, theatre and street plays for creating awareness on social issues. Manash Protim Neog, an alumnus of National School of Drama was the resource person who emphasised on different forms of theatre.  He elaborated on a few theatrical productions which had tremendous impact on the society. “Acting is one of the powerful tools for social change which needs spirit of team work apart from other skills”, said Neog while addressing the participants of the workshop. “It was a new experience for us , we got to learn a lot about drama which shall be helpful for us when we perform street plays or drama focussing on social issues”, said Ravneet Kaur, a student of K C Das Commerce College and a member of Youth Collective.   FST has been engaging young people for bringing social change through ‘Youth Collective’. Youth Collective has been initiated by FST for enabling young people to take part in social transformation and become agents of change. Apart from the workshop, there was a film screening at FST premises. FST organises documentary film screening every Friday apart from book reading sessions. FST is a not for profit, gender just, apolitical, indigenous philanthropic organisation, conceived, led and managed by people from the region, to support forward looking development-based initiatives in NE India.

15 Jan 2008 - 12:38am | editor
Assam Association, Mumbai has cordiall invites all to the Magh Bihu celebration on 19th January 2008, to be held at: Assam Bhawan, Opposite Centre One, Near Vashi Railway Staion. Th eprogram will...