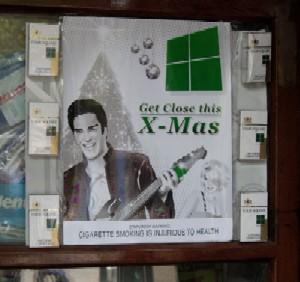 Activists to go to court for legal action against Godfrey Phillips

The point-of-sale tobacco advertisements that were violating the Indian tobacco control Act in Goa, India, were removed by the evening of 16 January 2008.

In the lead up to the removal of these advertisements, activists and media had reported that the advertisements of a cigarette brand of world's largest tobacco company - Philip Morris' Indian subsidiary were blatantly violating 'The Cigarette and Other Tobacco Products Act 2003" and the rulings for the point-of-sale tobacco advertising.

Clearly due to the mounting pressure, these tobacco advertisements were removed by last evening.

"I'm extremely happy that the advertisement boards were removed! But we cannot take these violations lying down! I'm moving the local court against the Godfrey Phillips [Indian subsidiary of Philip Morris], the dealers and the kiosk owners" said

Dr Shekhar Salkar, General Secretary of National Organization for Tobacco Eradication (NOTE India). "All the activists must watch for any violation and book these irresponsible industrialists".

The rulings for point-of-sale tobacco advertising in accordance with 'The Cigarettes and Other Tobacco Products (Prohibition of Advertisement and Regulation of Trade and Commerce, Production, Supply and Distribution) Act, 2003', envisage stringent and immediate action by the State Government against advertisement of smoking and other tobacco products.

The rules clearly mention that on point-of-sale of tobacco products, only the kind of tobacco product being sold should be mentioned, and no brand name, or any other promotional message or picture is permitted under the Indian law.

But the tobacco advertisements boards in Goa were violating this law. "This advertisement is, at the onset, reckless contempt of the law" had said Dr Salkar, in a letter addressed to the Indian subsidiary of Philip Morris demanding an unconditional apology for this gross violation and disregard to public health.

"The Act does not allow display of pictures at the point of sale of tobacco products, which has been done [pictures were displayed earlier] in the advertising board placed at a kiosk in Panaji near Hotel Lucky, opposite Municipal garden and kiosk below D. V. talaulikar hospital, Khalap Mension, Vasco,Goa. The law states that, at a point of sale of cigarettes, the boards shall contain only the words: - 'Cigarettes are sold here'" had reported Dr Salkar.

Although the rulings of the tobacco control Act mentions stringent and immediate action by the state government against such violations, it is yet to be seen how urgently and stringently will the government act to protect public health from the tobacco industry interference.

28 Feb 2009 - 3:39am | shariefzamanborah
The Sonari unit of Assam Jatiyatabadi Yuva Chatra Parishad (AJYCP) today burnt the effigy of State Forest Minister Rockybul Hussain in protest of brutally killing of a pragnent elephant and its tasks...

11 Sep 2017 - 3:43pm | AT Staff Reporter
Along with the other parts of India, Pachim Mangaldai ICDS Project, Darrang also celebrated National Nutrition Week 2017 from 1st September to 7th September in different Anganwadi centres under it...