The Centre for North East Studies and Policy Research (C-NES) announces the premiere of 'Where there are no roads … ' at the India International Centre (Kamladevi Chattopadhyaya Block) on May 14, 2013 at 6.30 pm.

Maulee Senapati is the Director and Cinematographer while Sanjoy Hazarika, Managing Trustee of C-nes and founder director of the Centre for NE Studies and Policy Research in Jamia Millia Islamia, is the producer and script-writer.

The documentary will have its North-east premiere later this month, in Guwahati, on May 24 at Jyoti Chitrabon Studio, Kahilipara, at 6 pm.

The film is about a unique experiment, a major innovative health campaign that reaches some of the most marginalized and poorest communities who live on hundreds of inaccessible islands, called saporis, on the river Brahmaputra. There are no roads here. But, over a dozen specially-designed boats, conceived and developed by C-NES, and manned by doctors, nurses, lab technicians and pharmacists as well as crew, organizers and community workers reach more than seven lakh people, pulling them out of a deadly cycle of maternal and infant mortality, disease and poverty, conditions which contrast dramatically with the overwhelming beauty of the place. C-NES is supported by the National Rural Health Mission (NRHM), Assam, to implement a project providing preventive and promotive health services in the islands through specially designed boats.

In addition, the Population Foundation of India, which has funded the film, is also supporting C-NES with a campaign for behavioral change intervention in five Assam districts where the boat clinics work.  The targets are eligible couples and adults who are informed about the importance of family planning, reproductive health, proper nutrition for mother and child; the programme has had encouraging results with growing numbers opting for family planning measures and safe, institutional deliveries of children.
The C-NES Boat Clinic Project is a socially inclusive intervention that tackles another formidable challenge -- geographical exclusion.  It has leveraged boat clinics in stepping up comprehensive healthcare services for hard-to-reach communities in saporis on the river Brahmaputra in Assam. The boat serves as the vehicle for delivering healthcare to people belonging to different states, different caste groups and divergent indigenous population and stimulating comprehensive behavioural changes among the sapori population especially the currently married women and men on issues pertaining to reproductive health and choices of contraception.


The film is of 48 minutes duration. We hope that you will come and see one of the most innovative health care programmes not only in the country, but in the world.

21 Jan 2018 - 10:58am | AT News
Kokrajhar: Preparations are afoot in Kokrajhar to hold the biennial conference of the Assam Satra Mahasabha at Rashmela ground from January 26 with 3 days colourful programme scheduled. Talking... 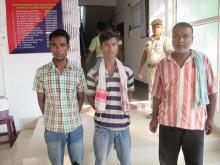