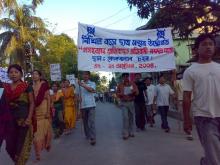 7 Jun 2012 - 4:40am | editor
Despite overcast skies, star-gazers and scientists lined up at the venues across Assam on Wednesday morning to get a glimpse of Venus passing over the Sun. Venues in all the districts were teeming...