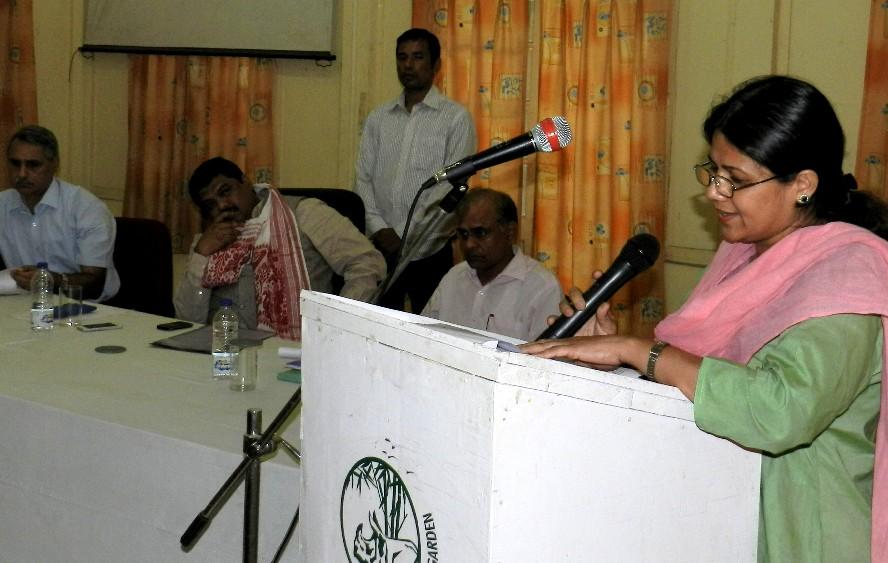 In view of the worsening scenario vis-à-vis rhino poaching in the State, the Assam Environmental NGO Forum has recommended a number of measures to the forest department and the Kaziranga National Park authorities to ensure wildlife protection. The recommendations were presented at the invitation of Forest Minister Rockybul Hussain at a meeting at the Assam State Zoo recently.The core committee members of the forum headed by its Coordinator Mubina Akhtar (Green Reporter) and members namely-Jayanta Kumar Das (Green Society, Udalguri), Dr.Bibhuti Lahkar (Aranyak),Raj Phukan (Green Guard)etc joined the Ministers meet which was also attended by Principal Secretary,Forest,Assam and Principal Chief Conservator of Forest (Wildlife ) etc.

"There is a lack of good relationship between the KNP authorities and the local communities in and around the park. This results in less community support in park management besides seriously hindering intelligence gathering. The forest department needs to build a good relationship with the fringe people with regular interactions, engaging them more often in the projects concerning KNP as well as minimizing the conflicts with them,” the Forum noted.

Underscoring the need to impart knowledge/practical training about KNP to the staff, the Forum said that the newly recruited forest guards, although well-equipped, find it hard to adjust in the difficult terrains without proper knowledge about the park.

"They need proper grooming as well as motivation and dedication to wildlife protection. Training of these new recruits is a must before their posting in KNP. Eligible casual workers also need to be appointed as frontline staff,” it suggested, adding that for enhancing local participation in park protection, local eligible youths should be employed as front line staff. Regular river patrolling, especially along the vulnerable stretches, was cited as another crucial area for wildlife protection in Kaziranga.

Expressing concern over the new settlements and tourist facilities, including dhabas and resorts coming up in the Haladhibari and Panbari animal corridors, the Forum said that the government must shift the barriers for facilitating unhindered movement of wildlife. Calling for ensuring strict accountability, the Forum noted that there was no accountability mechanism in the KNP management authority for any rhino poaching incidents.

Taking adequate precautionary measures against flood, greater public and local NGO involvement, adoption of new anti-poaching technology, coordination with the Karbi Anglong Autonomous Council as most flood-affected animals migrate to Karbi hills during floods and lots of poaching incidents invariably follow were some other measures recommended.

21 Nov 2008 - 1:47pm | editor
Assam’s agri-business sector is set to receive a face lift. Courtesy NEDFi. The region’s finance body is coming up with a new scheme which could be a giant leap towards making the state...

ULFA(I) wants Bihu to be skipped

5 Apr 2020 - 1:12pm | AT News
Guwahati: The United Liberation Front of Asom(I) has urged the people to skip the upcoming Rongali Bihu in the time of COVID19 menace.   In a video message,  a senior leader of the...