11 Nov 2012 - 5:32am | editor
Despite strict vigil, ULFA militants are moving with arms without any hindrance in Sivasagar district. Sonari police recovered a huge cache of explosives during a joint operation with army in Bahbari...

Railways to connect NE capitals by 2020

26 Feb 2015 - 12:40pm | Abdul Gani
As per the grand plans of the Northeast Frontier Railways for India’s North Eastern region, there are plans to connect all the state capitals of the region by 2020.This was stated by NF Railways... 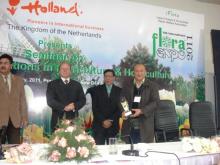